Launched in 1888, Sunlight is Unilever’s oldest brand in India. Initially Sunlight became popular as a laundry cake. But with changing consumer preference – powder detergent became more popular. As a result over the years the importance shifted to other HUL detergent brands like Surf, Rin and Wheel and Sunlight received a step motherly treatment. When HUL faced the competition from Nirma – rather than using Sunlight as a response they launched a new power brand Wheel. Then they launched detergent cakes under brand names of Wheel and Rin causing further sidelining of Sunlight.

After HLL adopted the “power brand strategy” they planned to phase out this century old brand. But then, they relaunched Sunlight in 2004 as a powder detergent. Currently this range is sold in only two Indian states: West Bengal and Kerala. In the price-quality spectrum Sunlight is placed above Wheel and below Rin. The twin benefits that the detergent brand in India promises are: brightness and color protection. This message is conveyed in Sunlight advertisements showing people wearing bright clothes and spreading cheer and brightness around them. Consequently the tagline of the brand is “Spread the Brightness”.

From 2007 there has been some efforts to revitalize this heritage brand if the ‘Come Clean’ campaign by the ad agency O&M can be considered as a sign of the same. 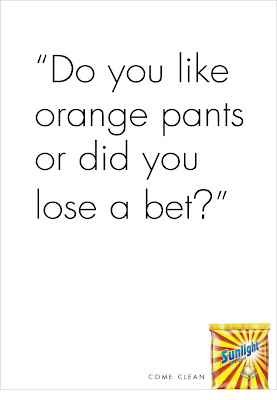 Worldwide Sunlight is present in different forms in different countries – like a bath soap in Australia and a dish cleaning liquid in Latin America etc.

Below ad is one of the oldest ads of Unilever from 1898 (yes! before the TV days) featuring Sunlight.

2 thoughts on “Sunlight – Spread the Brightness”